Simply put, the new Mercedes-AMG E 63 is the most powerful E-Class Mercedes ever.

Not unsurprising really as performance models such as the Mercedes-AMG E 63 rarely offer less power than the model it replaces. The trend is always to offer more power, more torque and sometimes more accessibility.

Accessibility might be an odd choice of words, but considering that the new E 63 AMG produces an almost unbelievable 450kW and 850Nm of torque (in Mercedes-AMG E 63 S 4MATIC+ trim), transferring that power to the road in a manner that allows for real world use, by non-race driver pedigree owners, must be somewhat of a headache for the engineers at Affalterbach. 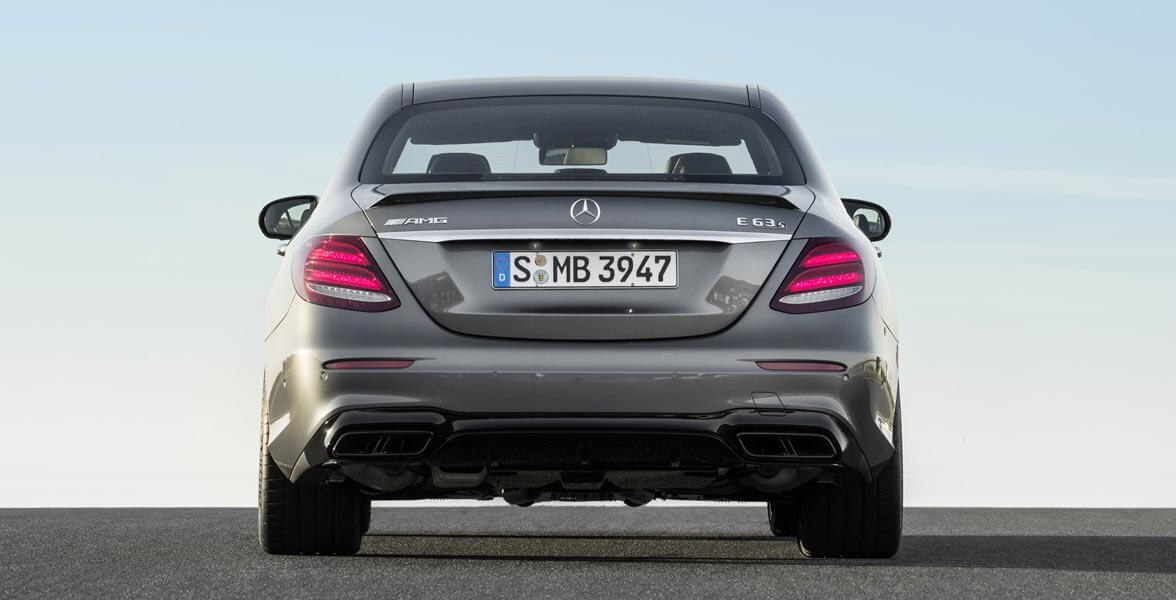 It is for this reason that the new E 63 AMG features a completely new Performance 4MATIC+ all-wheel-drive system with variable torque distribution to the front and rear axles, which until now was heavily rear biased. Transferring all that torque towards the tarmac through a 9-speed AMG Speedshift MCT (Multi Clutch Technology) gearbox. Yes, you read that correctly, nine forward gears.

This might sound like gratuitous overkill for even a performance based sedan, but in real world application, this allows for a low revving final drive. What this means is that even though the Mercedes-AMG E 63 will rocket towards the horizon with unprecedented speed and hit 100km/h in just 3.4 seconds, it does allow it to consume an average of just 9.2l/100km (manufacturer claim). However, this impressive average fuel consumption is mostly due to a clever system dubbed AMG Cylinder Management, which effectively allows the twin-turbo V8 to become an efficient 4-cylinder turbo.

While the design will always be subjective, there can be no denying the performance orientation of the E 63 AMG over more regular E-Class stablemates. From the deep front air intakes, and flared wheel arches to the wider wheels and race-bred rubber and boot spoiler which is a genuine functional addition to help reduce rear axle lift at speed, the Mercedes-AMG E 63 might just be the perfect mix of everyday limousine-like anonymity and tyre-shredding performance sedan. 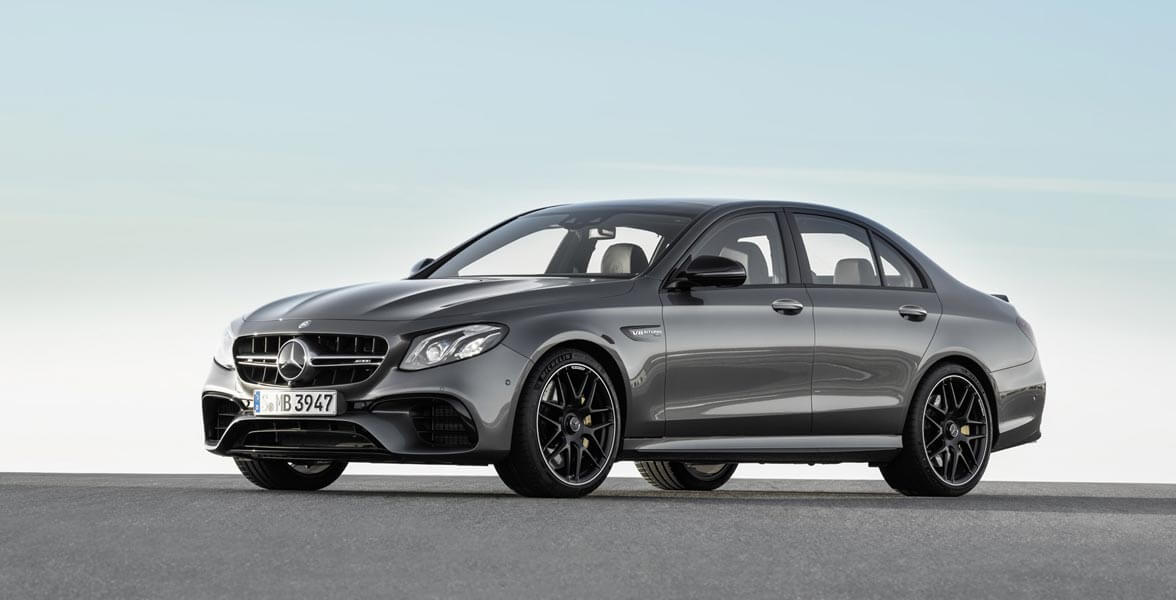 Both E 63 models are exclusively available with the innovative AMG Performance 4MATIC+ all-wheel drive system. Allowing for the best of both worlds, during normal or wet road conditions drivers can rely on the added safety of an all-wheel drive configuration, but if the mood requires it, a pure rear-wheel drive setup or ‘Drift Mode’ can be activated.

Part of the standard specification for the E 63 S 4 MATIC+, this can be activated in the “Race” drive program using the shift paddles, provided that ESP® is deactivated and the transmission is in manual mode.

The AMG Speedshift MCT nine-speed sports transmission is specially tuned to requirements in the new E 63 4MATIC+ and E 63 S 4MATIC+ allowing for extremely short shift times, fast multiple downshifts and the double-clutching function. Combined with the AMG Dynamic Select where drivers can switch between ‘Comfort’, ‘Sport’, ‘Sport Plus’ and ‘Individual’ the level of driver personalisation is almost unmatched. 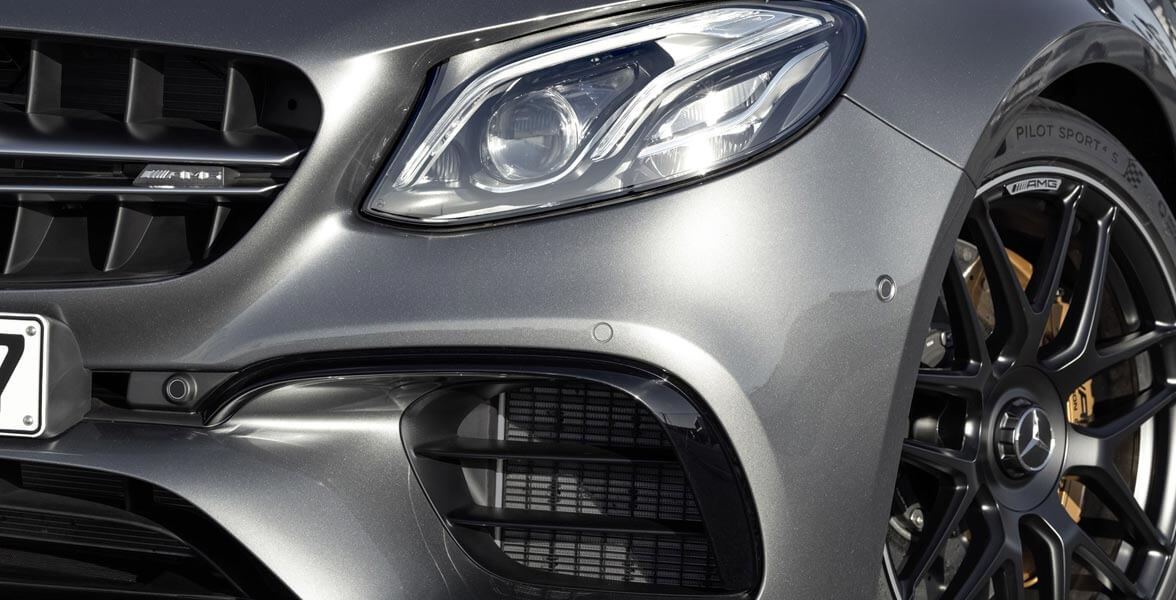 For the dragstrip (read robot) enthusiast, the Racestart function is new and is said to have been simplified considerably. All the driver has to do is press the brake pedal forcefully with their left foot and simultaneously fully depress the accelerator pedal with their right foot.
The on-board electronics sets the optimum engine speed. Release the brake pedal, and the E 63 will optimally claw for traction as it reaches top speed as quickly as possible.

To improve traction and vehicle dynamics the E 63 4MATIC+ has a mechanical rear differential lock and the E 63 S 4MATIC+ has an electronically controlled rear differential lock. Both reduce the slip on the inside wheel when cornering, without control interventions in the braking system. This ensures that drivers will be able to accelerate out of a corner earlier and with more power thanks to the improved traction.

The large-sized high-performance braking system decelerates the performance sedan reliably and quickly and is fade-resistant even under high loads. The E 63 4MATIC+ has internally vented and perforated compound brake discs in size 360 x 36 mm at the front with six-piston fixed calipers and in size 360 x 24 mm with single-piston floating brake calipers on the rear axle. The E 63 S 4MATIC+ is fitted with even larger compound brake discs on the front axle in size 390 x 36 mm. For the more powerful variant, the AMG Carbon Ceramic braking system is available as an option with brake discs in size 402 x 39 mm on the front axle and 360 x 32 mm on the rear axle. 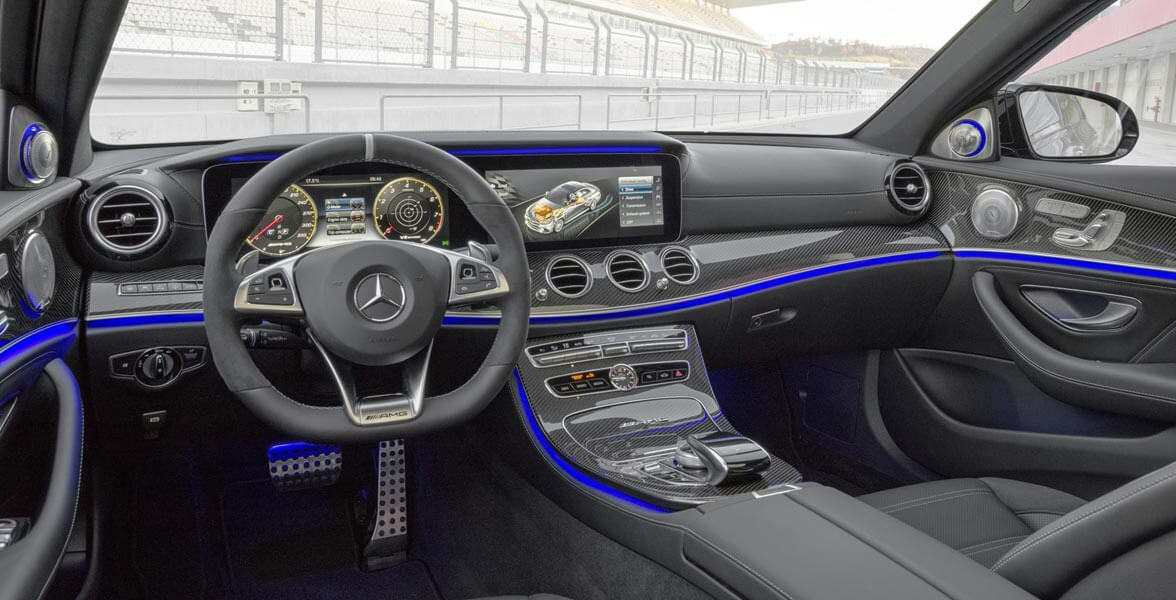 The new performance sedan celebrates its world première as Edition 1 on 16 November 2016 as part of the Los Angeles Auto Show. The sales release follows on 16 January 2017, with market launch beginning in March 2017. The Mercedes-AMG E 63 S is due shortly after in South Africa in the 2nd Quarter of 2017.