Everything about the Lexus LC 500 has been as dramatic and captivating as its looks right from conception. Having started life as an LF-LC concept back in 2012, although there were no plans to produce it at the time, Lexus had to change its collective mind after the overwhelmingly positive response.

Britain will have its first sight of the new Lexus LC coupe this weekend when it goes on show and takes to the track at the Goodwood Festival of Speed. The story behind the car’s development is as intriguing as its award-winning design, revealed by the men who led its development from a show-stopping concept car into an equally radical road-going machine.

The production version is hardly less dramatic than the concept, with supercar-like proportions and a V8 engine driving the rear wheels through a ten-speed automatic gearbox. An arched body line and oversized wheels give the LC 500 an athletic look, while the massive Lexus spindle grille dominates the front.

Beyond its styling and impactful performance, the new LC 500 serves as a symbol of the achievement that can result from heightened collaboration between design and engineering groups and their commitment to help overcome each other’s hurdles. 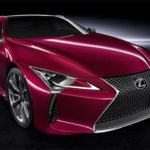 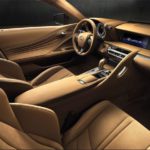 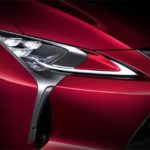 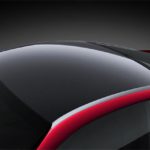 Chief Engineer Koji Sato and Chief Designer Tadao Mori headed up their teams in an unprecedented collaboration, embracing new technologies and advanced materials alongside established Lexus manufacturing traditions such as the hand-and-eye skills of the Takumi craftspeople.

So, when President of Toyota Motor Corp Akio Toyoda challenged these development groups to produce this special car, it meant surpassing many manufacturing, design, material, and dynamic obstacles that could typically compromise a vehicle’s targets or design vision.

The engineering and design teams have given their personal insights into the project in a series of interview features that cover the key development challenges, including how they succeeded in translating the stand-out styling of the original LF-LC concept car into the packaging of a viable production model.

The fruits of their labour will be given a high-profile platform this weekend at the Goodwood Festival of Speed, where the V8-powered LC 500 will be making runs on the famous hill climb course and will be on public display as the centerpiece of the Lexus stand.

The Lexus LC 500 will be launched in South Africa in the first quarter of 2017. Further details will be released closer to the date.